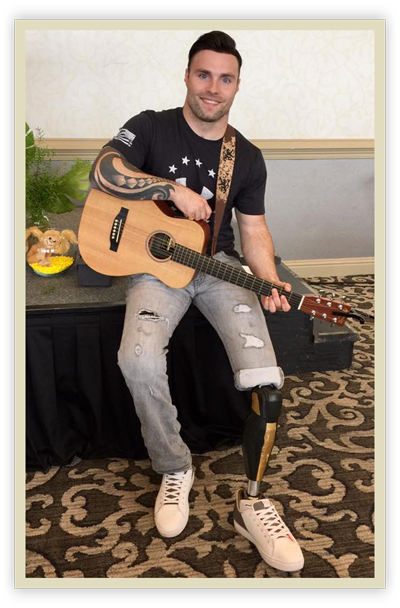 My name is Justin Lane, aka JP Lane. Many people have their own reasoning for joining the military, mine is probably similar to most my age, in 2001, watching the twin towers fall. I was reminded of that feeling when I was old enough to sign up. At the age of 20, In 2008, I joined the U.S. Army as a Combat Engineer. I was deployed, in 2010, to Afghanistan to search for IED’s (Improvised Explosive Device). I was blown up 3 separate times, and the 3rd one got me. July 2nd, 2011, I was blown up by a 200lb IED while on mission. It was the first IED to penetrate an RG31 truck.

The blast resulted in putting me in a coma for 6 weeks. I lost both my legs, right arm snapped in half, lost my four front teeth, pelvis snapped in half, spine dislocated from my pelvis, and everything in my torso was destroyed by shrapnel except for my heart and left lung. In total, I received 26 injuries, and had 28 surgeries, this completely changed my life. Doctors said I wasn’t going to be able to do many things, like, use prosthetics because my legs were so badly damaged. Also, that I wouldn’t be able to speak properly or sing ever again because of a tracheotomy. 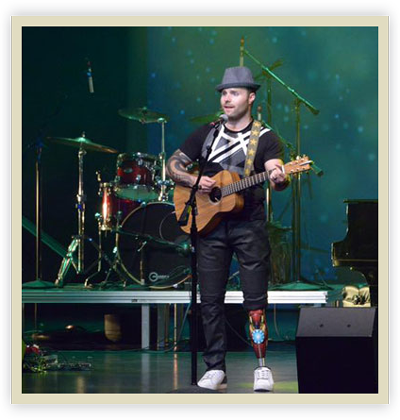 With each day, I am proving them wrong. I am one of the few double amputee recording artist. God wasn’t finish with me yet. Since I got my prosthetics, I have performed for 2 Presidential Inaugurations, Presidents, Obama and Trump. I have performed with Lee Greenwood, Neil McCoy, Aaron Tippin, Jason Castro, and more. I have performed for non-profit organizations such as Adapt-a-Vet, Helping a Hero, which are in support of our military. Also, performed for organizations that support the local community, like, Taking it to the Streets, who feed the homeless, and G.A.N.G Outreach in Colorado, that provides positive/encouraging sport camps for underprivileged kids. I signed the dotted line, when I joined the Army, to SERVE and protect the American people, and since I am still alive, by the grace of God, I will still serve. Retirement is just a word! I also do motivational speaking to share my story and give hope to those who need it. I let people know to “Never Give Up, Never Surrender.”

I have also been able to perform and inspire thousands in Brazil and Mexico. My goal is to impact the world with more than just music. Changing hearts and minds one at a time.

In a situation like mine, most people would look in the mirror and feel that no one would want them. But, I was blessed to have found someone who not only loves me for me, but also supports my career and my passion of singing. Crystal, now my beautiful bride as of Feb. 2018, has been a huge support for me and given my life more purpose. We now work together inspiring couples around us, telling them the amazing story of what brought us together. 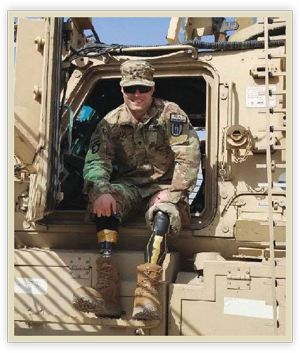 April 1st thru the 9th, I went back to AFGHANISTAN to have a “proper exit.” I was able to visit the hospital I was first recovering at after being blown up. Since I was in a coma, I did not remember much of the hospitals, and traveling I did during that time. As I visited different bases around Afghanistan, I was welcomed back with open arms from thousands of troops. I was proud to walk down the welcome ceremonial row, holding my “NICE TRY TAILBAN” shirt. One of the most amazing feelings was getting to wear the U.S. Army uniform once again, but nothing compared to the feeling of getting to leave the country on my own two feet, prosthetic feet, with my head held high!

Upon returning from Afghanistan, it seemed like my story was about to end. Crystal and I were in a serious car accident that rolled our jeep and destroyed our car. Airbags went off in every direction, and glass shattered with every turn of our vehicle. Thank God we were wearing our seat belts, otherwise the damage we received would have been worse. Most of the damage was psychological, bringing back horrible dreams of the accident on a nightly basis, and having brought fear to Crystal with sitting in the passenger seat each day. But as a part of the strong and determined Lane family, we will overcome. Nothing in this world will defeat us or bring us down!

“We have a purpose to bring hope, love, inspiration and
the idea of being mentally strong, to people across the world.”